Four years from now, Ford is promising the world with self-driving cars and it means cars without steering wheels or brake pedals will be on the road in 2021. 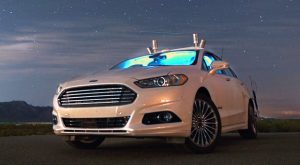 The announcement came as preparation for the coming CES 2017, and that many car rivals see the deadline as too ambitious.

Ford on the other hand insists that the cars will have to be used within an Uber-like service before putting them on sale. This announcement is considered as one of the upcoming surprises to come at the CES 2017 to be held in Las Vegas, USA.

Ford’s ambitious announcement isn’t the first of its kind,  and that car watchers are saying Ford’s only new offer  to its second-generation driveless Fusion Hybrid is its new cosmetic looks and that it has only taken off its pipe organ-style suite of sensors on its roof to give off its more streamlined appearance. Many are saying it is just another Ford people’s car.

More so, Ford is announcing its plan of doubling its fleet of driveless Fusion Sedan and estimated about 90 cars for its first release this 2017. It provides information of its testing activities in California, Michigan, and Arizona and there is also a plan of bringing the testing activities in Europe, kicking it off in United Kingdom and then another testing in Germany.

Ford added that three years ago, they have done and undertaken some improvements to the projects and the company is keeping its track of its target in coming out with a fully autonomous car that they said is aimed at providing ride-sharing or ride-hailing by 2021.

Ford’s autonomous vehicle program is headed by Chris Brewer who in his part gives details of what’s behind this computer-controlled car. He said he and his team have upgraded both the hardware and software, which accordingly allow the new car version to be able to see two football fields of distance that is possible in every direction. The car is generating one terabyte of data per hour that is processed by its brain down on its trunk.

The latest driveless car Fusion is a product of numerous investments and acquisitions Ford has done within the time frame  preceding the announcement of its ambitious plan of building a fully autonomous car by 2021. Besides, Ford  and its Chinese investors, the internet giant Baidu are reported to have poured out 150 million dollars. The result is a better look and much data processing using LIDAR sensors from Velodyne.

Ford is confident by 2021; the promise will be fully a reality.

The Key to Making Your Way to the Top

Undeniable Reasons Why Thermographic Testing Needs to Get Done